The new average fleet targets that came into force in Europe on January 1st 2020 are having big impacts on the supply chain, pushing OEMs to produce and sell more hybrids and EVs. But the rules are complex and varied by brands, volume and sales. Here we provide a summary of the key rules and terminology.

For a full analysis on changing EU and global CO2 vehicle emissions requirements and their impacts on the industry, download our free report, ’Climate Change vs Carmakers’

If carmakers’ vehicle fleets in the EU are not able to meet the new targets of 95 grams of CO2 per kilometre starting from this year, many will face stiff fines that could run into the billions of euros. That would take a painful bite out of already thinning margins across the sector both for carmakers and automotive suppliers.

OEMs have been preparing for the stricter targets for years, which will be the strictest in the world. Many have launched new hybrids, plug-in hybrid and battery electric vehicles to coincide with them. However, emissions data will be based upon actual registrations, not production – and there is simply no guarantee that consumers will purchase these models.

Indeed, in the last few years many brands in Europe have seen sales skew towards higher-emitting vehicles. The UK Energy Research Centre recently published research showing that SUVs are now outselling EVs by 37 to 1 in the UK. The decline in diesel sales following Volkswagen’s ‘Dieselgate’ scandal has also had the unintended consequence of increasing CO2 emissions; although diesels emit more particulate matter, they are more fuel efficient than equivalent petrol engines.

Other factors are also outside the control of OEMs. Different levels of charging infrastructure, purchase or tax incentives across EU markets, for example, contribute significantly to EV take up.

To that end, OEMs might do better to make incremental improvements to emissions on current vehicles rather than spend billions to bring to market a few zero emissions EVs that consumers may not purchase. For example, applying stop-start ‘micro-hybrid’ technology across the whole range may yield greater overall emission reductions in sold vehicles.

The clock is already running on which cars consumers actually purchase in 2020. If OEMs don’t see their vehicle sales mix reaching their prescribed emissions targets as the year progresses, some may even withdraw high-emitting vehicles from the market, or apply heavy discounts on low emission hybrid, plug-ins and EV models.

There are, however, carmakers and suppliers ahead of the curve, while others are accelerating investment and partnerships to catch up – the PSA and FCA merger is a case in point. Despite the challenges, the regulations could also have longer-term benefits; for example, EVs in Europe might achieve total cost of ownership parity with standard internal combustion engine (ICE) vehicles faster than elsewhere. And although the EU is set to have targets stricter than anywhere else, it is setting standards that many other regions – including China – are following.

What is clear is that there will be big implications across the industry, and executives needs to understand the rules.

The regulations and terminology are not always so easy to understand. You can download our full analysis of the regulations and the fines from Autumn 2019, but below is a useful explainer of key terms, as well as who is likely to be most affected. 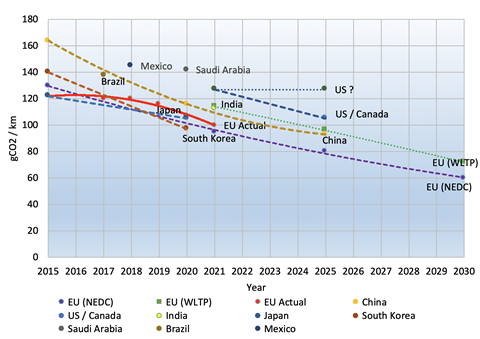 EU CO2 targets are set to be the world’s strictest

However, the EU is also setting standards that other regions are following. For a wider analysis of EU and global regulations, download our free report

Will all vehicles and OEMs need to achieve the 95g CO2/km target across the EU?No, not exactly. The 95g CO2 per kilometre target – which is reduced from 130g – is not for individual passenger vehicles but is for the overall fleet average for passenger cars sold within Europe (not just those produced or on offer). This equates to a fuel consumption of 4.1 litres per 100km for petrol vehicles, and 3.6 litres per 100km for diesel.

The targets also vary somewhat by OEMs. Targets are calculated according to an OEM’s average vehicle weight. For example, BMW will have a target of around 100g CO2/km. FCA has a lower target of around 91g CO2/km.

How much will OEMs have to pay in fines each year?

As has been the case since 2019 on the previous targets, for each gram of CO2/km over target, OEMs will be fined €95 ($106) multiplied by their annual EU sales volume. These targets will remain in place each year until 2025 when even tougher regulations are introduced.

Predicting fines is difficult because they are based on sales, but we forecast total industry fines could reach €5 billion by 2021 (for full details, see the complete report). Our estimate is much less than some analysts predict – but would still represent a tough hit on industry profits.

Will the regulations apply fully for 2020?

There is also the possibility of using ‘supercredits’ in the form of zero and ultra-low-emission cars that emit less than 50g CO2/km, such as EVs and some plug-in hybrids. These count as two vehicles in 2020, and 1.67 vehicles in 2021.

Are the targets by brand or across groups?

The regulation allows emissions targets to be applied at the group level. That means that the Volkswagen Group has an overall target that averages out higher emitting cars from Porsche, Audi, Seat, etc.

Can OEMs pool their emissions with one another? 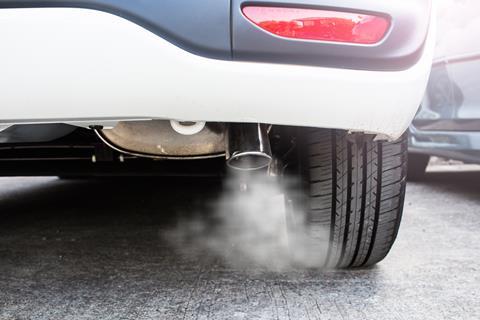 Foot off the gas

Are there any exceptions or exemptions?

Manufacturers that sell fewer than 1,000 vehicles per year in the EU are exempt. Smaller volume manufacturers can apply for ‘derogation’ – lower, more tailored targets – depending on volume.

When will the targets change again?

Does Brexit mean that the rules will not apply to vehicle sales in the UK?

That is highly unlikely but, as ever with Brexit, it’s complicated and somewhat uncertain. Under current terms of the withdrawal agreement, the UK will follow all European single market rules during the transition period, which will last through 2020. The terms of the UK’s relationship with the EU and single market is still to be negotiated, so there is little certainty beyond that. However, the Department for Transport has confirmed that the UK will pursue vehicle emissions regulations “at least as ambitious” as those of the EU, which suggests that the same or tighter targets will be applied.

There are questions, however, in how UK sales will be counted, and whether they will remain part of the aggregrate count for OEM sales across the EU, or whether carmakers would effectively have to manage fleet targets across two different regimes. That could also have an impact on exemptions and rules around derogation. The UK automotive trade body, the SMMT, has called for harmonisation with EU vehicle emissions’ regulations.

Who will be the winners and losers?

Back to Archive Legislation