BEIJING — China’s economy grew at its slowest pace in 28 years in 2018, with gross domestic product expanding 6.6%, down 0.2 percentage point from the previous year, according to data released Monday by the country’s National Bureau of Statistics.

The last time economic growth was so tepid was 1990, when the economy slumped in the aftermath of the Tiananmen Square incident. Last year, the economy was hampered by a drive to cut regional government and corporate debt, as well as China’s trade war with the U.S.

Despite the slowdown, the growth rate for 2018 exceeded the target of about 6.5% set by the Chinese government. The economy grew faster in 2017 for the first time in seven years, but slowed again in 2018.

The growth rate was 6.4% in real terms on the year in the October-December period of 2018. It was down 0.1 of a percentage point from the July-September period, marking a slowdown for the third consecutive quarter below or equal to 6.4% for the first time since January-March 2009, just after the collapse of Lehman Brothers Holdings.

The growth rate for the October-December quarter of 2018 was the same as the average figure of 6.4% in a market survey conducted jointly by Nikkei and group company Nikkei Quick News. It was the lowest quarterly figure since 1993, the first year for which such statistics are available. Quarter-on-quarter growth slowed to 1.5% from the 1.6% for July-September. Annualized as in developed countries, the growth rate was about 6%. 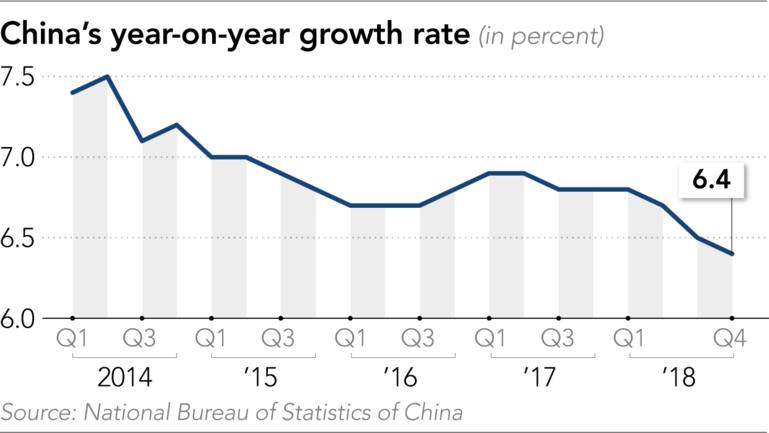 Other economic data was also released on Monday. Fixed-asset investment, including construction of plants and condominiums, rose 5.9% on the year in 2018, contracting from the previous year’s 7.2% increase. The biggest factor was slowing infrastructure investment, including in railways and roads, which grew 3.8% on the year in 2018, down markedly from the previous year’s 19% increase.

Industrial output increased 6.2% on the year in 2018, contracting from last year’s 6.6% increase, dragged down by slumping production of cars, smartphones and PCs. Industrial output grew 5.7% in December.

The U.S. and China imposed additional tariffs of up to 25% on each other in July-September. Chinese products worth a total of $250 billion were affected by the additional U.S. tariffs, and exports to the U.S. fell for these products. As the impact of the trade war became clear, both consumption and production have shown steep declines since autumn.

Yusuke Miura, senior economist of Mizuho Research Institute, said that the “decline in the fourth quarter in 2018 is caused by slowing consumption rather than the direct impact of the trade war.” 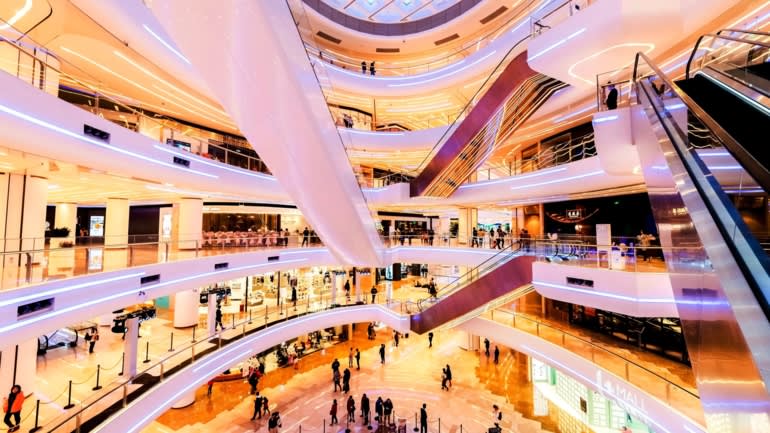 He noted that auto sales are falling in reaction to the tapering of stimulus measures from 2017, and home loans are burdening people who bought houses during the 2016 boom, putting further downward pressure on consumption. “The trade war might lead employees of exporting companies to cut spending,” he added.

The slowdown should continue in 2019 because it is likely that the influence of the trade tiff will spread and exports will decline further.

Market analysts see strong downward pressures in the first half of the year, with the world’s No. 2 economy expected to expand only 6.2% in real terms, according to the average of forecasts from 32 economists polled by Nikkei and Nikkei Quick News in December.

There may be some improvement in the second half as the government has already announced support measures, including monetary easing, large tax cuts and an expansion of infrastructure investment, but the surge could be temporary.

“We expect the uptick in industrial output and consumer spending to prove short-lived,” said Julian Evans-Pritchard of Capital Economics in a report on Monday. He points out that headwinds from weakening global growth and slower credit growth could likely intensify in the coming months.

Back to Archive China