China Moves To Increase Number Of Electric Vehicles On Its Roads

President Trump may not talk much about electric vehicles, but there’s another American — with better name recognition in China — who does.

The voice of actor Leonardo DiCaprio, popular in China for his role in the 1997 blockbuster Titanic, graces the showroom of Auto Shanghai, the city’s biennial automotive expo, accompanied by images beamed on a circular wall showing Beijing covered in smog and children wearing pollution masks.

“Let us reconnect with nature, fill our lungs with clean air instead of pollution, let us see beauty more clearly,” says DiCaprio in a commercial that’s part of a display for an electric vehicle made by Chinese automaker BYD. “With new energy, we can see this future. Now let’s make it ours.”

The message is repeated by automakers throughout the showroom at this year’s exhibition.

The U.S. automaker, which sold 1.3 million cars in China last year, has announced it will electrify 70 percent of its vehicles in China by 2025. This comes as Beijing is calling on auto manufacturers to sell more electric vehicles to reduce vehicle emissions, as well as China’s dependence on foreign oil.

By early next year, Beijing will require automakers in China to ensure that at least 8 percent of all vehicles they manufacture are electric. The country had more than 1 million electric vehicles in 2016 — an 87 percent increase over the previous year. Vehicles range in price from $6,000 to $200,000 (for the most expensive Tesla model). 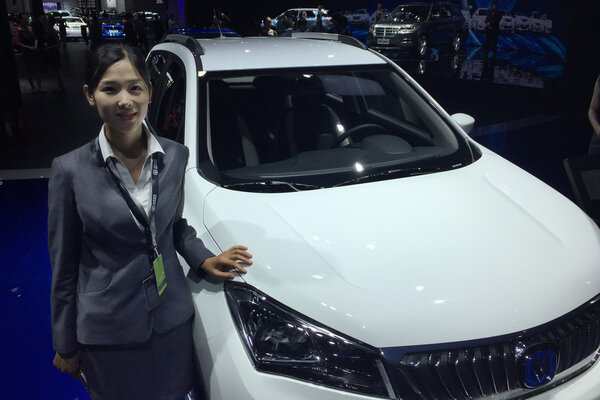 Tong Xiuying of Chinese automaker Chang’an stands in front of her automaker’s first electric SUV, which will go on sale at the end of this year.

Rob Schmitz/NPR “It’s the largest automotive market in the world and will continue to be in the foreseeable future,” says Worthington. “And you look at the number of mega-cities that there are in China, the density of their populations, so finding alternative solutions is not an unreasonable thing to expect the Chinese government to be doing.”

The government has subsidized charging stations for electric vehicles — China had 300,000 stations as of December 2016 — and it has also paid people who purchase electric and plug-in hybrids thousands of dollars’ worth of subsidies. But according to Tong Xiuying of Chinese automaker Chang’an, consumer demand is high regardless of incentives.

“In cities like Beijing, Shanghai and Guangzhou, traffic is very heavy and gas prices are high, so people prefer driving electric cars,” she says. “But it certainly helps that these cities are offering big incentives if you purchase these vehicles.”

“In Shanghai, you normally have to pay around 15,000 U.S. dollars for a license plate, and that’s after you win one in a lottery!” says Lu, laughing. “If you buy a plug-in hybrid, the city will give you a free license plate, just like that. That makes it pretty alluring.”

But more alluring still is the big American truck. Lu and his friend join others posing for selfies in front of a Chevy Silverado, a full-sized pick-up that’s bigger than anything they’ve seen before on China’s roads — and not a vehicle you can plug in. The two joke that they could fit a machine gun on the back of it.

“I’m not sure China’s ready for this,” says Lu. “But Chinese cities are expanding, and people are starting to move to quieter suburbs to live. One day when richer people move to the countryside, I guess they’ll buy trucks like this. It’s a matter of time.”

And when that day comes, says Lu, maybe big trucks like these will all be electric, too.